THE PROJECT AND PROCESS BEGINS

In November, 2014, I was contacted by Dr. Claire Shaw, Borough Council President, on behalf of the New Hope (Pennsylvania) Historical Society. They were referred to me as a natural perfumery expert and someone who may be able to assist them in deciphering a cologne “receipt” (also known as a recipe back then, now called formula) for a cologne that was written in 19th century apothecary script. Society Historian Wendy Gladston had discovered the document when searching through the books and records of the Parry Mansion, the most revered historical landmark in New Hope. At first it was believed the recipe was from 1800, but was later clarified to 1859. 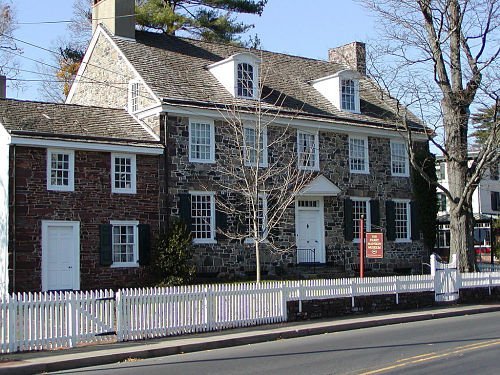 Parry Mansion, one of the oldest homes in New Hope, PA, and a landmark on Main Street. Today, New Hope is a famous artist colony and a destination town for tourists.

My research revealed the fascinating history of the Parry family of New Hope and Philadelphia. Philadelphia is my home town, and I have visited New Hope many times in the past, but never the Parry Mansion. There is a link to the Historical Society at the end of this blog post, so you can explore more of the Parry and New Hope story.

Benjamin Parry is the patriarch of the family, the builder of the Parry Mansion, and the person who named the town New Hope. He is the grandfather of the medical doctor/pharmacist who created the cologne formula, Dr. George Parry. In the 19th century, the local pharmacist often made colognes, toothpaste, curative herbal preparations, and all sorts of household concoctions. He was born in Philadelphia and earned his medical degree from the University of Pennsylvania. I grew up in a neighborhood adjacent to the university, so felt an even stronger link to this project.

The original scan Dr. Shaw sent me was faint, and I couldn’t see the details, so when rescanned at 1200 dpi, the recipe was clear – yet still needed a lot of work, converting the measurements to modern milliliters.  I called in a fragrance historical expert, Andrine Olson of Vashon, Washington, to assist in deciphering the document. We both had our own reference materials on apothecary symbols that we had collected over the years so we referred to them this effort After careful examination of the document, Andrine found a typo in the symbols, and once corrected, the formula emerged. Good detective work! 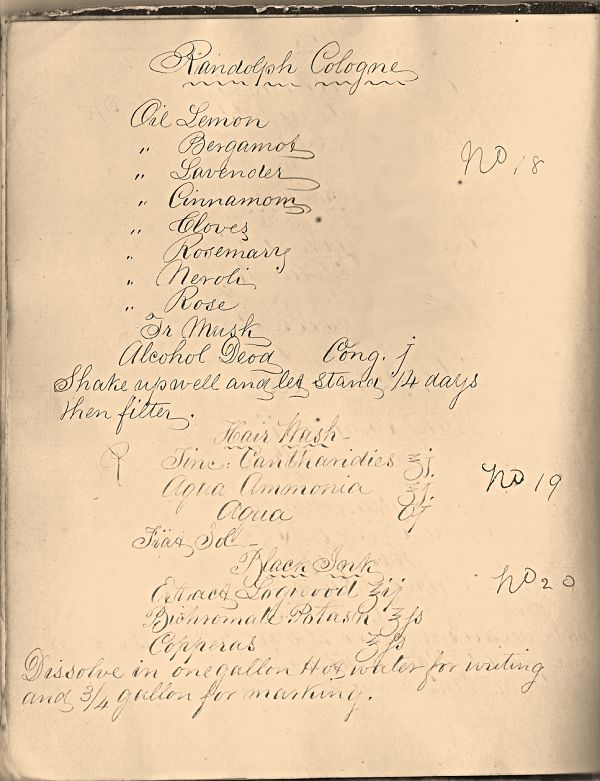 Randolph Parry 1859 cologne receipt/recipe/formula. The name Randolph was to honor the pharmacist George Parry’s ancestors. The amounts of the aromatics in the formula have been obscured to protect the rights of the Society in recreating the cologne. You can see samples of apothecary symbols in the hair wash and the black ink formulas.

A lot of communication went back and forth, and we made the decision to use the American system (not the British system), and worked from apothecary drams and drops and gallon references, arriving at a modern volumetric formula of milliliters and liters/gallons. The formula indicated that the concentration of aromatics was light, around three percent (3%), what is still referred to as cologne strength. In comparison, modern perfumes may range up to 30% aromatics, which would be very strong by 1859 standards.

The aromatics were very much in line with a classic cologne, going back to the original colognes, notably Hungary Water and 4711. The formula contained citruses, lavender, rosemary, rose, neroli (orange blossom), and some spices – cinnamon and clove. The one ingredient that was used lavishly in those days, and that constitutes a big percentage of the Parry cologne formula is musk tincture. Musk tincture is made from a gland of the endangered musk deer. Today, musk tincture is highly regulated, and almost impossible to obtain. My colleague, Bruce Bolmes, of SMK Fragrance, is the only licensed importer of musk in the USA and he generously donated the needed amount to enable us to faithfully recreate the cologne.

I was in weekly communication with Dr. Shaw as my colleagues and I moved along in the project, and in February, I wrote them all about the blending of the compound base, perhaps the first time it had been made since the 1800s:

This afternoon, I sat down and measured and blended all of the ingredients, and the perfume is both sexy and innocent, with an alluring gentle nature. It’s nice to be reminded of how our ancestors in the 1800s liked to smell, it could translate into a modern all-natural cologne that would be marketable.

The blend really came alive with Bruce’s tincture of musk, a product that was used lavishly back then. Of course, all this would have been a much more difficult project without Andrine quickly and precisely transcribing Parry’s notations.

Dr. Parry would be astonished to know his lovely cologne was revived on Feb. 17, 2015!

I wanted the Society to be in charge of all of the remaining process, so that they would know how to replicate it in the future. I provided instructions on suppliers, with websites and suggestions on purchases. Dr. Shaw obtained the organic sugar cane alcohol and necessary supplies for the rest of the project, which included mixing the compound base with the alcohol, aging the cologne for the requisite two weeks, filtering, and bottling. The Society was aiming for an April 27 launch, when they hold their annual “Mondays at the Mansion” meeting. The public is invited to this well-attended event, the deadline was met, and the cologne was a huge success. 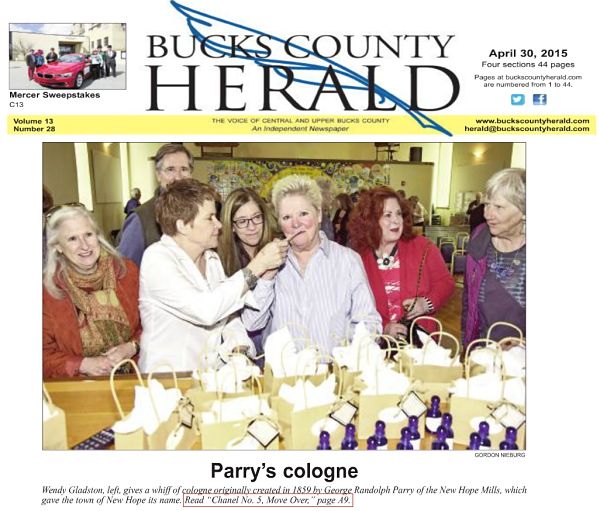 Dr. Shaw was delighted with the reception for the cologne. It will be sold at their annual Garden Tour on Saturday, June 6, 2015. They are not ready for mail order sales at this time, so if you wish to obtain some of this cologne, subscribe to this blog, because I will announce it here. Just think – to be able to experience a true replication of a 19th century cologne that includes the gorgeous, rare musk tincture. I truly appreciate the Society’s faith in me and my team for this project, and I am happy to have handed this fragrant treasure back to them.

In my opinion, the cologne has universal appeal on several levels: it is a true glimpse into the cologne preferences of the mid 1800s, and it is a delightful, refreshing scent. It can be enjoyed by men and women, young and old. Those familiar with “Florida Water” cologne will find Parry Cologne very similar in fragrance.

Andrine Olson is a fragrance historian and may be reached via her Facebook page.

About Benjamin Parry, the patriarch of the Parry family of New Hope, and Philadelphia, Pennsylvania http://www.newhopehs.org/who-was-benjamin-parry.html

Information forwarded to the Society by me: the amounts of citruses and spices in the formula exceeded the more conservative amounts used today. The citruses can cause citrus dermatitis if used on skin exposed to sunlight, and the spices may cause irritation to skin. The Society was advised to provide information about this to customers, and make recommendations that it be used under clothing, in the hair, in perfume lockets, or worn at night.