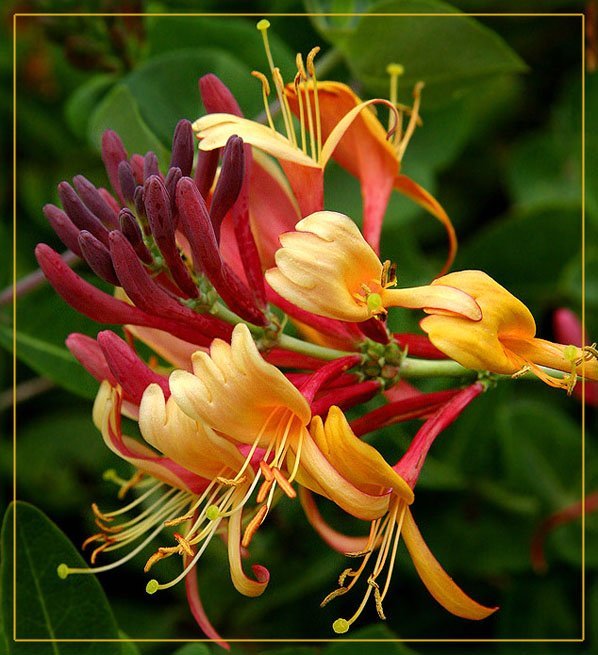 Disclaimer: I do not sell honeysuckle absolute, so I have no financial interest in this, but as a leader in the natural perfumery field, I do have an obligation to red flag bad information/bad supplies and help perfumers and customers understand the level of purity and ethics that we adhere to.

No names will be mentioned here to protect everyone’s identity.  These two (selected from several) comments were posted by members of the 2400+ member natural perfumery group I host on Yahoo:

#1 Yeah – interesting…. well I remember in xxxxxx book she mentioned the
same thing… that it is all synthetic, but then she brought it onto the
market, from italy…. I called and they said that it is true, nearly all
is synthetic, but that this one was real. I would doubt if after writing it
in her own book she would not be REALLY careful

I searched on the Internet, I called several supply houses, and here are my findings.

None of the people from the big houses know of any natural honeysuckle absolute.  I would expect they would have their fingers on the pulse of any new material that came to market, in fact, they would probably be the ones producing it.  One man joked “I’d love to see these trellised* honeysuckle farms, they must be beautiful – in a dream!” *honeysuckles require expensive/extensive trellises for support of the climbing vines. Another wondered why a supplier/extractor in Italy didn’t contact them because the growing, harvesting and extraction process economics dictate that it not be a one-time production, and no more has appeared on the market. (My note: honeysuckle can be grown without trellises, but it would be a nightmare to harvest, a tangled mass of vines.)

The Internet search yielded the usual Indian suppliers touting their honeysuckle absolute, quoting Arctander’s book and giving a botanical name, at least (even if incorrect).  My catch phrase for natural perfumers is “be the captain of your own fragrant ship” and part of the basic knowledge a perfumer should have given by the seller is the correct botanical name, the solvent used in extraction, and yes – a GC/MS!  None of the suppliers on the Internet provide this.  The hodgepodge of misinformation out there on honeysuckle absolute is amazing.  One site says that Julia Lawless says that there’s an essential oil!  The botanical name given isn’t one that would be used in perfumery anyway, and I have NEVER heard of it used in aromatherapy.

The history of the herb and spice trade and of the aromatic oil trade is a history of con artists fooling people.  Unscrupulous sellers of cayenne pepper used to mix the pepper with flour and water, and bake it into crackers, which they then ground up and sold as pure cayenne. Aromatherapists have been complaining for decades that oils are often ‘stretched’ with real – or synthetic – isolates to either bring more profit to the supplier or to enhance the scent.  Those of us who want to use only 100% real, pure, natural aromatics have to be vigilant all the time.

Demand a GC/MS and optical rotation report on any new, “rarer than rare” aromatic on the market.  If you can’t get it, move on and don’t buy the product.  Be aware that those reports can be faked for many oils, since the supplier may just cut and paste the name of the GC/MS company and put it out as the GC/MS for their company, but I doubt, truly, that any previous GC/MS for honeysuckle absolute exists, since it hasn’t been produced in decades, according to my industry sources.

Please take a stance against sweet-talking Indian sellers of compounded part natural/part synth absolutes, and also against big corporation European sellers of ‘proprietary formula’ compounded fruit flavor/fragrance essences.  Let us create our own doppelgänger or simply ignore the tempting offerings.  Tincture dried raspberries or peaches, don’t buy some corporate version of it, it’s easy to make your own.  Be your own captain whenever possible.  Our art will benefit from transparency, good steering through the murky waters by wise captains, and will result in trust and respect from our peers and customers.

Parting words:  if something sounds too good to be true, it probably is.

I encourage you to subscribe to my blog and/or the comments, and if you leave a comment, make sure you check the box that will allow you to see follow-up comments.  The recent Pregnant Perfumer post (see earlier post this week) had some lovely follow-ups as the visitor comments referred to another’s post, but if the original poster didn’t check that box, she may have missed the follow-up.

I’ll be here to answer your questions about perfumery until 10 PM ET tonight, and heck, if you want to send me a smidgen of any honeysuckle absolute you’ve purchased, I’ll try to find someone who can run a GC/MS optical rotation study on it!  Two mls minimum, and I’ll perform an organoleptic evaluation on it, too, and post it here. Please write to me privately with information on your absolute, and I’ll accept the first two samples sent.