Christmas Day is a fixed date and thus always comes a few days after the Winter Solstice, with the growing days, in the northern sky plays a big role in the Biblical story of the Three Wise Men following the star that led them to the Christ child’s manger in Bethlehem.  Today’s blog is a very personal one, it’s my story of growing up in the largest Catholic parish in the United States in the 1950s and 1960s. 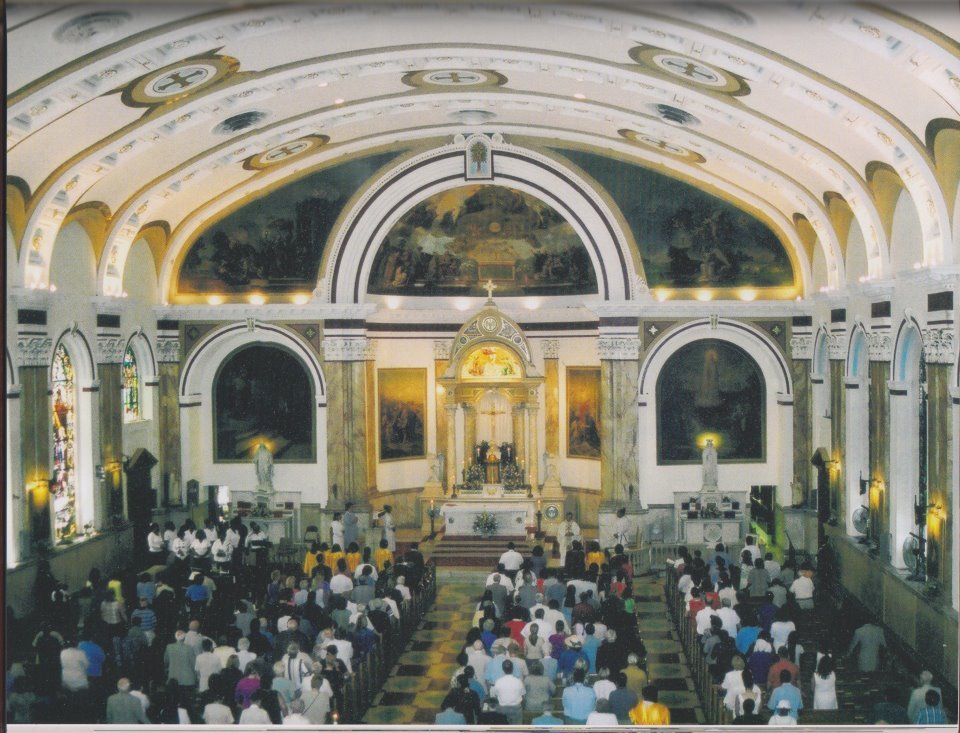 
Most Blessed Sacrament Church was a magnificent structure, with an upper church (pictured), a lower church, rectory, convent for forty nuns and three school buildings.  The forty nuns were needed to teach the 3,500 students in grades k-8.  Every bit of our daily lives was lived under the influence of the church, it seemed.

We lived in mid-sized row homes, with postage-stamp sized yards, but we felt we were connected to something larger due to the grandeur of the church, clad inside in marble, oil paintings, mosaics, and huge stained glass windows.  I’d call it a mini-cathedral.  Sunday mass was mandatory, and Christmas mass was a solemn time, even if we children were hyped up in anticipation of the presents we’d get on Christmas day. Starting in first grade, we were taught a strict Catholic doctrine from the Baltimore catechism.  I hadn’t even thought of the word catechism in years, until I wrote that line, and it came back to me, a long-lost memory.  I suppose when you are drilled to repeat rote questions and answers from a book for years, it is buried deep in your subconscious.

As i wrote earlier, even though I rejected the harsh teaching of the church, I still respected their beliefs in religious matters.  The blessed mother was to be adored, the baby Jesus was the son of God, and Christmas was his birthday.  Years later I put it more into perspective: the Catholics adored him as the son of God, the Muslims said he was a great prophet, and he was undeniably Jewish, so everybody recognized him, his place in history, they just all had a different place for him.

At Most Blessed Sacrament, he was the cornerstone of our church and belief, and on Christmas Eve and Christmas Day all our thoughts were on him and what he meant to us. 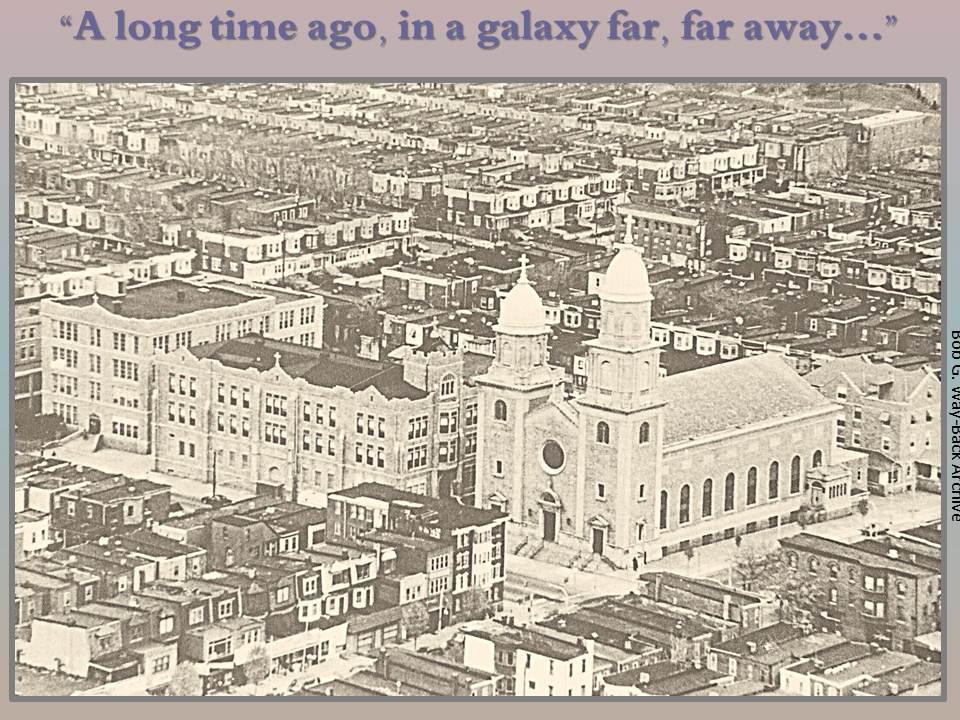 Someone on a Facebook page devoted to the old neighborhood added that wistful caption to the photo. Growing up with up to 100 students in a classroom, 25,000 parishioners packed closely in a small urban area, I suppose we never thought that era, that culture, would end.  In the late 1960s the neighborhood began to change, and crime became commonplace, and the mass exodus began.  I left in 1970, at age 20, and moved to Berkeley, California, rarely to return.

When I began forming this post in my mind a few days ago, I felt very positive, but last night and today I became very sad, and spent a lot of time crying.  I realized the feelings of an era that passed, coupled with my mother’s death in March, and my having a slowdown in energy the last month, was taking a toll. When my ex called yesterday, I missed his call.  I know he was concerned about my first Christmas without my mother, whom I had taken care of for the last 14 years. I called him back today, and started choking up a bit, but held off until we hung up.  Facing the demise of Most Blessed Sacrament, the neighborhood, the stark reality of ‘you can’t go home again’, with my mother passing seemed like a double whammy.  After hours of crying, I was beginning to worry about myself – that isn’t like me.  Then I began in earnest to start to collect the images for this blog, and research some dates and specifics, and I stopped crying.  Just like that.

I suppose it is true what they say, that work can distract you from sorrows – it can also take them away when you fully face them.  The nuns did try to instill in us a picture of being part of an eternal community, something that I still believe and feel, even if I don’t follow the church’s teachings, and regard myself as a Jew with Buddhist sensibilities. I have never attended Christmas mass since leaving Philly in 1970.  I carry my faith and spirituality within me, yet I must acknowledge that the church taught me to be strong and believe in a higher power, and that Jesus, the center of the church’s teachings, deserves recognition and thanks on this, his day.

To the hundreds of thousands of Most Blessed Sacrament’s former parishioners, now scattered all over the Earth, thank you for being a part of my childhood, for being a part of a great community, and if you are still attending Christmas Mass, I know your thoughts will be back in that grand church in southwest Philly, where we thought life would go on unchanged, for Eternity.  Life has a way of upending your plans, either thorough sociological changes, or physical ones, like the lives affected by Superstorm Sandy.  For those suffering through the loss of their homes and livelihoods and neighborhoods due to that storm, my thoughts are with you and I hope that you find faith and rebuild your lives, making them even better than before.  That’s my Christmas wish for you.

My mother loved all the perfumes I made.  She lived long enough to smell Royal Lotus, my 2011 launch.  I haven’t launched a new perfume this year, even though I tried.  I just ran out of energy, and needed down time. Wax melts and soaps were easy to launch, but perfumes are the soul of my art, and my soul needed time to heal.  For today’s giveaway, I’m offering a box of samples of my 11 perfumes, glimpses of my soul, expressed as fragrant visions of eternal scent, blended with care and love.  Just leave a comment about any aspect of this rather unfocused, but nostalgic post about my childhood memories, the catholic church, neighborhoods and people who pass away, or your memory of Christmas day in this time of the Winter solstice, when the sun’s ray linger longer on the Earth, warming us and giving us faith that Spring will once again come.  Comments may be left until 10 a.m. December 26 and the winner will be notified by email.