The celebration of Kwanzaa is uniquely African-American in origin, like jazz music. It means “First Fruits of Harvest” in Swahili, an East African language.  The concept of Kwanzaa was developed in 1966 by Professor Ronald McKinley Everett (now known as Maulana Karenga).  To quote Karenga on the creation of Kwanzaa: ..the.. goal was to “give Blacks an alternative to the existing holiday and give Blacks an opportunity to celebrate themselves and their history, rather than simply imitate the practice of the dominant society.”] It is inspired by African “first fruit” traditions, and the name is derived from the name for the Swahili first fruit celebration, “matunda ya kwanza.” Wikipedia

Kwanzaa is celebrated, as are the other holidays in this blog event, during the time exactly when the Winter Solstice commences, or during the days following it, as the days are growing longer.  Kwanzaa commences on December 26 and lasts for seven days. There are seven values that are celebrated during Kwanzaa, known as the Nguzo Saba, Swahili for Seven Principles. 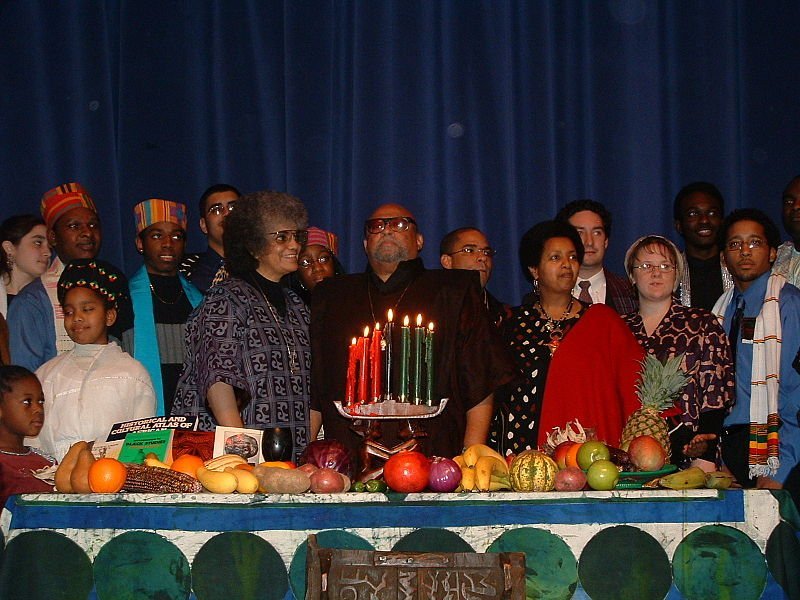 Kwanzaa table setting traditionally includes seven candles, ears of corn, fruit, a cup and a cultural woven mat all symbolizing principles of the new holiday. Celebrants put a green tablecloth over a table they place in a central place in their home, and place a woven straw mat called a Mkeka on top of that table which symbolizes the historical foundation of African ancestry.

On top the mat is a Kinara (a candle holder) with seven candles. It holds three red candles on the left, three green candles on the right, and a black candle in the center. A candle is lit every day, as during Hanukkah. The black candle is lit first, the lighting then going back and forth between red and green, starting with the outermost candles and moving in to the center.

The table also should include Mazao, crops from the community including a bowl of fruit; Muhindi, an ear of corn for each child in the household;  Zawadi, gifts for the children; and Kikombe cha Umoja, a cup to represent family and community. (various sources)

How widely is Kwanzaa celebrated? From the Huffington Post: Karenga has claimed that 28 million people worldwide celebrate the holiday, but only an estimated half-million to 2 million million Americans do, according to Keith Mayes, author of Black Power and the Making of the African-American Holiday Tradition.

“It just no longer shows up in some of the places that it did 30 to 40 years ago,” Mayes told the Philadelphia Inquirer. “You still have people who actually celebrate it. You have third generations of Kwanzaa celebrants… but Kwanzaa no longer has its movement which brought it forth, which is the black power movement. That movement has waned.”

If Mayes—a University of Minnesota professor in African-American studies who is considered by national outlets to be an expert on the subject—has his numbers right, somewhere between 1 and 5 percent of the 40 million people in the U.S. who identify as African Americans celebrate Kwanzaa. Telling a random black person on the street “Happy birthday month!” is a safer bet than “Happy Kwanzaa!” But this time of year, people, white people especially, tend to toss the greeting at black people they don’t even know. (Huffington Post)

Well, I don’t, and I never heard anyone else do it.  I have been to a number of Kwanzaa celebrations over the years, and the closeness of the family and the dignity of the rituals are lovely. 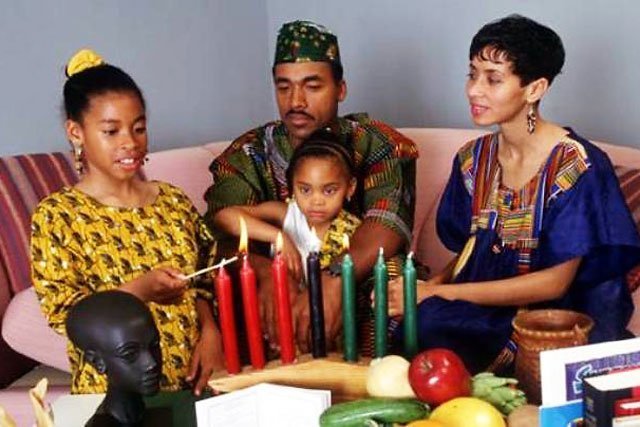 My giveaway for the Kwanzaa post will be my award-winning perfumes, Amberess.  All of the aromatics in Amberess are from Africa, and the most treasured and rare Musk Rose, in both otto and absolute form are the crowning, shimmering jewel of this perfume.  It is available in only one form, the 3.5ml pure perfume.  Leave a comment about Kwanzaa and you’ll be entered into the random drawing.  Deadline for a comment is 10 a.m. Dec. 27th.