How to Make Perfume – Why I don’t enfleurage golden champaca

When you make perfume from flowers, there are several ways to extract the scent. I love to enfleurage rare flowers. Enfleurage is placing flowers on a bed of semi-hard fat, such as shortening, or rendered leaf lard and suet. The next step in the process is to “wash” the fat in alcohol. This post isn’t about enfleurage, except to point out why I don’t enfleurage a flower that seems ripe for the process.

Some flowers, even though they emit a lovely fragrance, shouldn’t be enfleuraged. There are several reason for this. Orange blossoms are fragile, and would fall apart in the enfleurage tray, requiring laborious defleuraging process – picking the petals out, one by one, with tweezers. Tweezers are routinely used to remove flowers from enfleurage fat, but not these, it would be a greasy fiasco, with much fat clinging to the petals, enveloping them.

My golden champaca tree is in full bloom, and I have never enfleuraged these flowers. Why? The edges of the flowers tend to start to ‘brown’ or slightly decay shortly after harvest. They would be a watery, moldy mess in enfleurage fat. I also don’t macerate them, which is place them in heated oil. The French, and before them, ancient cultures, such as the Egyptians, routinely placed flowers in warm fat or oil to extract the scent, but I find champaca so delicately scented, so ethereal, I use alcohol to tincture them. 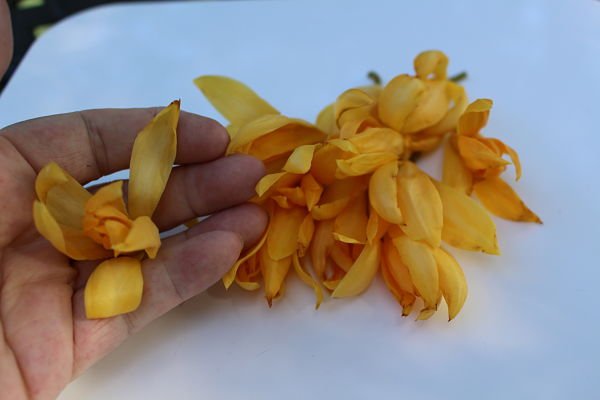 I have been making my golden champaca tincture for several years now, and probably have about 20 charges of replenished flowers in the menstruum. The tincture is divine!! 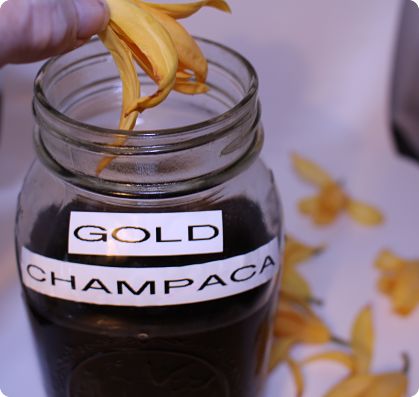 This flower is at the limit of wilting or decomposition that I will allow into my tincture. I may snip off the tips if the browning is too much. On-the-spot decisions are necessary when processing botanicals.

This is why solvents are used to extract champacas. It’s quick, and saves the flowers from decomposition. Alcohol is a great solvent, and does the job. I have a glorious extract to work with, a statement every artisan perfumer can relate to. To make perfume with raw materials is fun, and you often get rare plants into the mix that you might not otherwise have access to.

Do you enfleurage? What observations have you made as to the limits of the materials you choose to work with?

PS. White champaca, Michelia alba – same decomposition problem, but to a lesser degree. An added problem with them is their tendency to shatter, thus the same problem as orange blossoms.