I have been working with perfumery aromatics since 1976. That’s the year I began to seriously study perfumery with the aid of a few rare books and the assistance of two retired perfume industry sales representatives. I had already been collecting essential oils and absolutes for hippie fun, but that year I got serious about making perfume.

At that time, I hadn’t come across labdanum, tonka bean absolute, myrrh, and some of the other thick and pasty aromatics. The thick ones, as I’ll call them from here out, are impossible to pour, or use with a dropper. When I did come across them, the perfume reps taught me about diluting* aromatics to work with them, both the thin, pourable stuff and especially the thick, difficult-to-work-with ones. *Dilution is the subject of another blog and is taught in Module one of my course.

I remember my jaw dropping when I read a perfumer recommend something like “50 drops” or labdanum in a “recipe”. Impossible! (and amateurish, too). This was about 15 years ago, and I was already using diluted aromatics to make my mods (modifications are the name given the experimentation with aromatics when composing perfume alternatives).

The typical way to make the thick oils more fluid was to heat the bottle they were in a bain-marie aka a water bath. What is a bain-marie? An invention by Maria the Jewess in ancient Egypt adapted for modern culinary and in our case, perfumery work. In the culinary world, custards, cheesecakes, and other foods are either cooked in or kept warm in, a pot containing water.

I typically used a “coffee cup” warmer with a borosilicate beaker on it that contained water up to about the halfway mark on the aromatics bottle. Messy and dangerous.

A Wonderful Revelation in Working with Thick Aromatics

So, for years, artisan perfumers were placing the bottles of myrrh, fir balsam absolute, oakmoss absolute, etc, into a pot of hot water. You had to pay careful attention that the water didn’t get too hot, and VERY careful when you removed the bottle from the water to pour the aromatic. Use a potholder, and make sure not one drop of water got into the receiver bottle, or the aromatic would be contaminated. A lot of scary, potentially dangerous work.

I have been teaching distance-learning perfumery online courses since 2007, pioneering both the concept of learning natural perfumery outside of the classroom, but more importantly to me, sharing decades of workarounds and introducing modern techniques to aspiring perfumers. 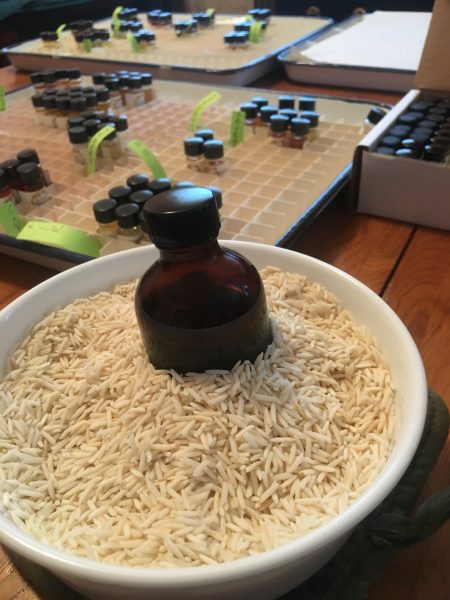 A few years into the course, in the student forum where we all chat, a student shared a brilliant idea about an alternative to using a bain-marie. Michael Singles suggested that fill a bowl or beaker with rice, heat the rice (two minutes seems to be a good time) in a microwave and then insert the bottle into the rice for a few minutes, and the thick oil will liquify. It works beautifully!  I have been on perfume and aromatherapy forums for decades, and had never seen this tip, it was a revelation! BTW, at the time, I didn’t have a microwave, and I heated the rice in a small saucepan on the stove, which also works beautifully. 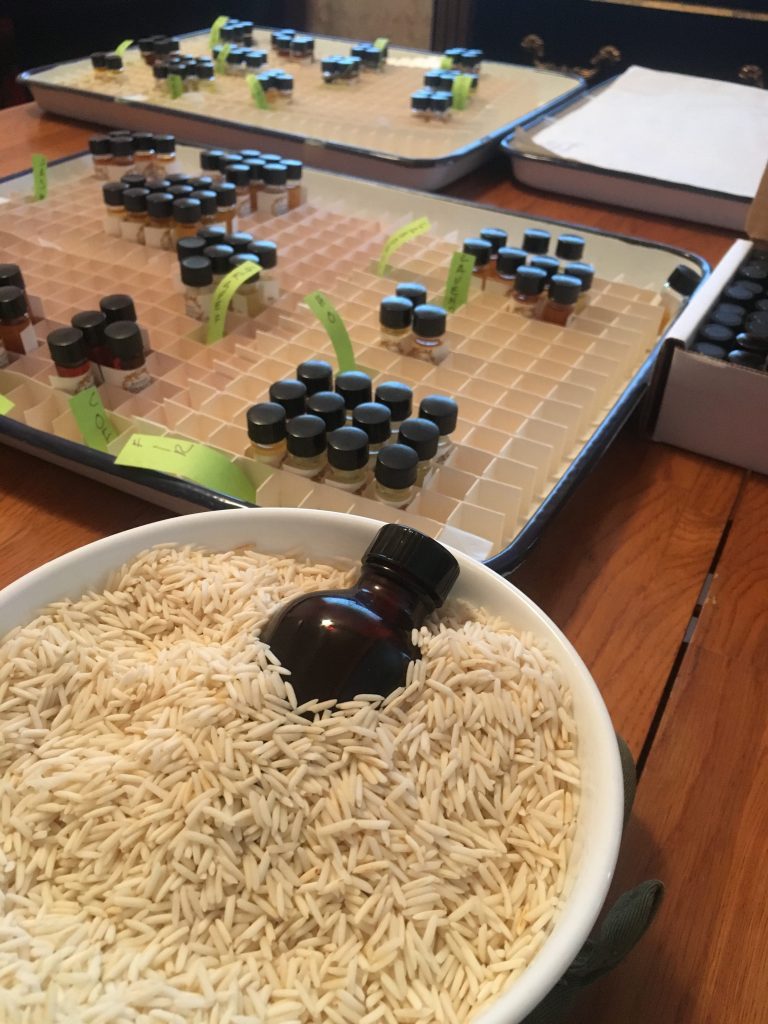 You’ll still need a potholder to handle the hot bottle, but no water is involved, no mess, no fuss! You have to reinsert the bottle into the bowl or beaker occasionally, as it does start to solidify after a few minutes, but what a great relief to have such an easy way to warm oils to make them pourable!

If the receiver bottle or jar has a wide enough opening, you can just pour the aromatic, but you’ll probably find you need a pipette to transfer the oil or absolute.

The rice is reusable, so after you’re done, allow it to cool, and place it in an airtight container and keep it for the next session. 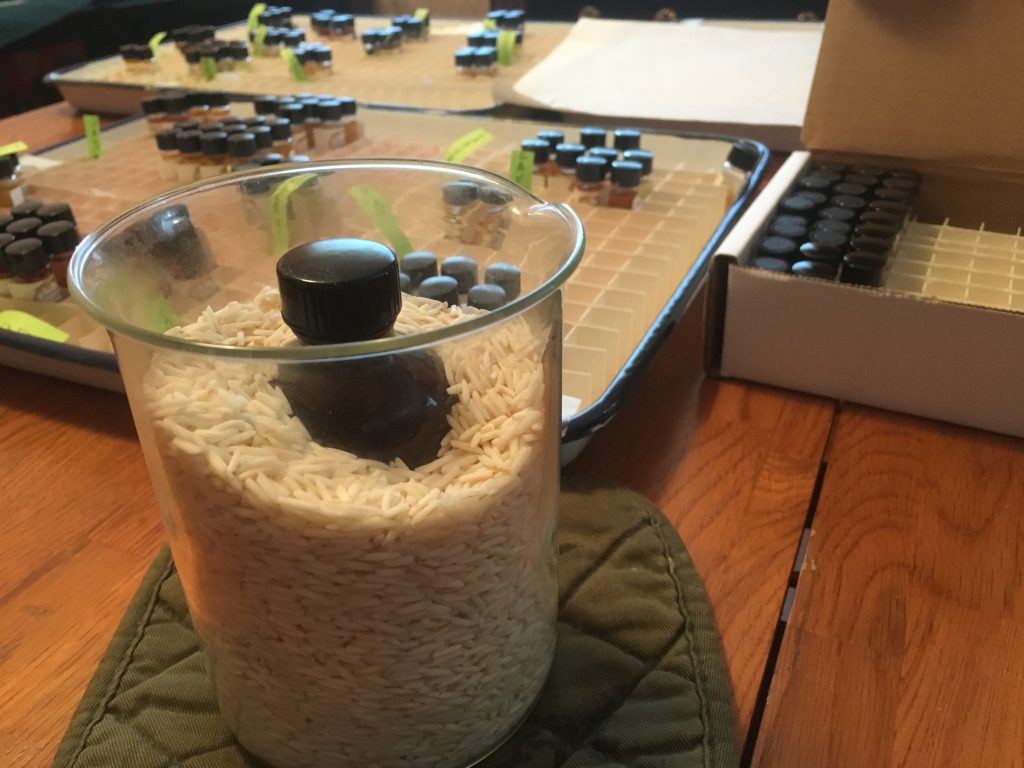 Using a beaker with the hot rice. Of course, this can be scaled up for a large bottle.

I told a friend I was working on this subject for my blog, and she said she had purchased several bottles of myrrh and couldn’t open them. Myrrh is notoriously thick and sticky, and I guess the cap is fused to the neck of the bottle. In this case, I would recommend burying the bottle in the hot rice and then attempting to open it. If successful, I would recommend pouring the now-liquified myrrh into a *jar*. Suppliers should pack thick aromatics in jars, not narrow-necked bottles, in my opinion. Once in the jar, you should apply a thin layer of coconut oil to the inside of the cap threads, and to the jar threads, as this might help avoid the stuck cap problem in the future.

I hope I have helped readers with this *sticky* problem and saved them having to deal with boiling water and all the subsequent problems that may entail. Let me know if this post has helped you, I know I depend on this method every time I work with thick, unpourable aromatics. This tip has been in the textbook for my Basic Course in natural perfumery since 2010, so there are many using this method. I gladly pass it on to the rest of the artisan community to help y’all out. I’ve shared it in various posts over the years, but recently realized I hadn’t blogged about it. Start heating that rice!