Sandalwood and Carrion: Perfume in pre-modern India – a class at the Institute for Art and Olfaction

We’re featuring a Guest Blogger today.  Daniel Krasofski is a student of mine, and he is generously sharing a report on a class in pre-modern Indian perfumes he attended recently.  The class was conducted by Professor James McHugh at the Institute for Art and Olfaction (IAO) in Los Angeles.

April 11, 2013, ‘Sandalwood and Carrion: Smell in Indian Religion and Culture’ 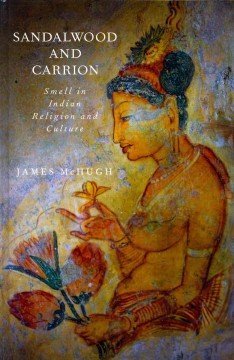 “You were born on the heights of Malabar,
yet woodsmen found you and brought you to a distant land
where men have ground you into scented ointment.
Grieve not, sandalwood, my friend;
it is your virtues have undone you.”

From “Sanskrit Poetry from Vidyakara’s Treasury”
Translated by Daniel Ingalls

Plant derived materials have been used as perfume and adornment for thousands of years, in every culture on almost every continent. These ancient cultures are heavily influencing some modern perfumers, on their quest for using natural materials. “Natural Perfumery” has seen a resurgence in the last decade as a viable alternative to the synthetic aromatic molecules in modern, commercially available perfumes. We seem to be at a beautiful junction point of modern science and ancient wisdom.

Through a number of fortuitous encounters in late 2012, I became aware of and involved with a non-profit organization based out of downtown Los Angeles called “The Institute for Art and Olfaction” also known as IAO.

On April 11th, I had the pleasure to attend a class taught by James McHugh, the Assistant Professor of Religion at USC at the IAO. The topic for the evening was ‘Sandalwood and Carrion: Smell in Indian Religion and Culture’ based on his recently published book of the same title. The evening was a fast paced, informative, interactive journey through ancient India’s natural, aromatic raw materials.

He began by presenting some of the key ideas, concepts and terms utilized in Indian religion and culture. The first being “Karma”, which literally can be translated as “actions” and refers to the results of what we do in life bears fruit, either good or bad / desirable or undesirable. In the context of the pre-modern Indians, smells had either a good or bad scent, and these scents could influence actions.

He also briefly talked about the Vedas (Vedic texts), the numerous ancient Indian texts that date back about 3000 years. Many of these texts reference aromatic plant material and products used in spiritual and medicinal practices. His book references, in great depth, many of these ancient books and manuscripts as well as a couple written in the last 1000 years.

The Vedic texts consist of many volumes on a multitude of subject matter. In the classic Ayurvedic medical texts, Susruta Samhita and Charaka Samhita, the sense of smell can be used as an analytical tool to determine the doshic / elemental imbalance. A practitioner can smell different body parts, or excretions, to determine the origin of an imbalance as well as prescribe specific aromatic substances to restore balance to the affected element.

Image from the Vedas

One of the things that struck me during the evening was the notion that pre-modern Indians consciously layered scents to communicate, non verbally, with the people of their community. The notion that scent is directly associated with memory, as in modern times, wasn’t their primary focus, but scent as a calling card, for the here and now. James referenced a story from the Mahabharata (1.94.41-45), that told the story of a king who followed an excellent fragrance that he could not specify. The king searched all around, and finally found the source emanating from a fisherman’s daughter “…Who was endowed with beauty, sweetness, and the fragrance, a beautiful divine image…” If I remember correctly, this was referred to as the “9 Mile Perfume”.

In the context of Indian religion, we read a few passages out of the Mahabharata (13.101)-
Perfumes please people and gods: …For the odor produced from flowers is taught to be twofold: desirable and undesirable. One should understand the flowers with pleasant odor to be for the gods. The majority of thornless trees are white in color, The flowers of those ones are constantly desired by the gods, oh lord.
…
By means of the perfume the gods are satisfied…

We reviewed a number of raw plant material that were, and still are, prized for their scents, colorand energetic/ doshic effect: Sandalwood, aloeswood, musk, saffron, camphor, nutmeg, cloves, cubeb(a fragrant pepper), frankincense and guggulu. I had the corresponding essential oils for a number of these raw materials, which were passed around on blotters for comparison. An excellent exercise for anyone who enjoys scents. 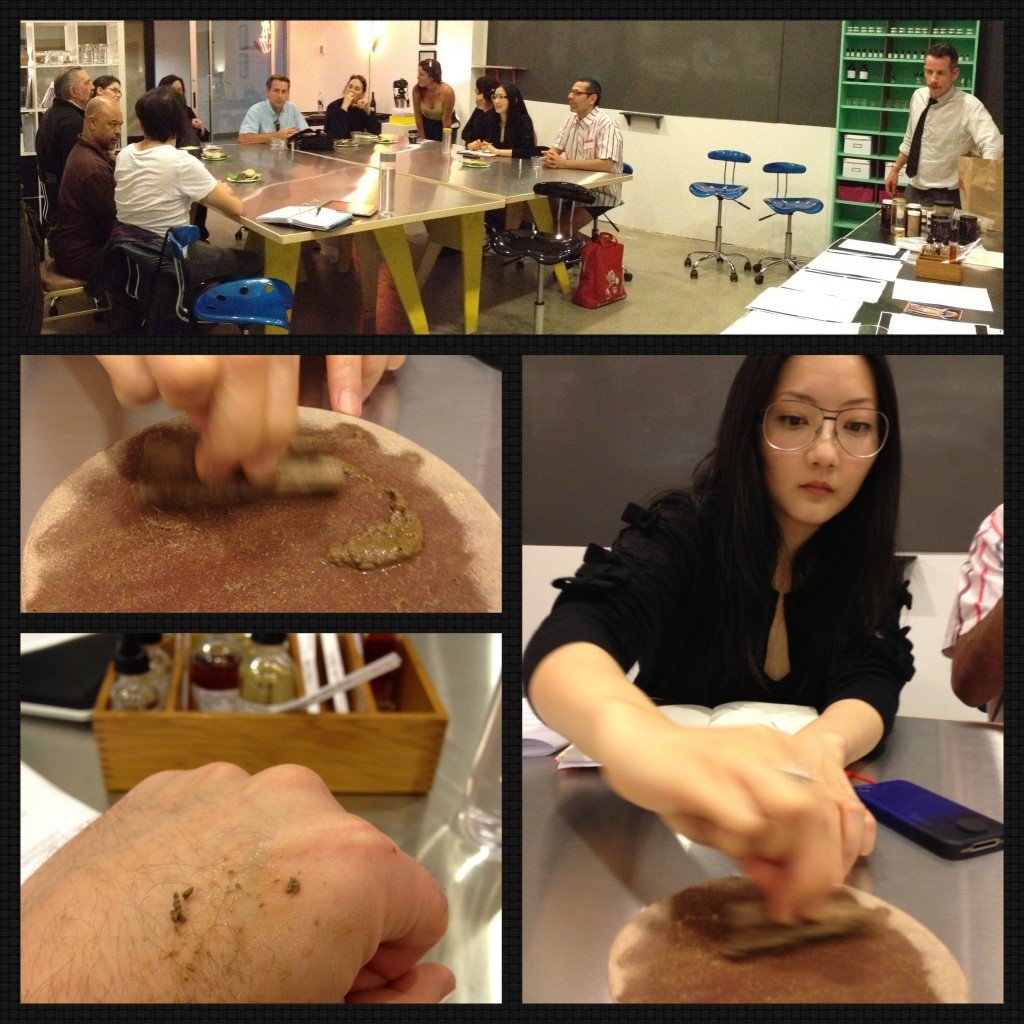 Students in Prof. James McHugh’s class on pre-modern Indian Perfumes at the Institute for Art and Olfaction, Los Angeles

While tracing the origins of raw materials to the different ages and regions of Southern Asia, we created a traditional “perfume paste”. This co-creative process of creating an ancient perfumed paste was the highlight of the evening, for me. James presented a rough, rounded grinding stone and a piece of agarwood. He saturated the stone with a few drops of water and instructed each of us to take turns at rubbing the agarwood on the rough surface, similar to what the monks would do in the temples to create sandalwood paste for rituals. 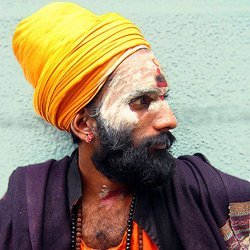 From the Internet, not the class: Perhaps this may have been an example of applying perfumed pastes to the skin

The stone was passed around the room so everyone could get a chance to erode the agarwood, making a thick paste. When a good amount of agarwood paste was collected, we added a couple drops of water and some musk grains. Again, we were instructed to grind/ mix the musk grains thoroughly. Next, he added a few drops of Saffron oil and a small amount of camphor crystals. After a few minutes, the ancient perfumed paste was complete. Everyone was given the chance to apply a small amount to their skin and it was amazing to sample and compare the different scents based on one’s chemistry. After everyone got to smell this paste, I offered a small amount of diluted Rose Otto and Jasmine essential oils to create the illusion of fresh flowers.

These aromatic pastes are utilized in Ayurveda for various healing techniques, as well as developing a personal scent. I likened it to the way we produce modern perfume. Using essential oils, we start by building our base notes, then moving to the heart of the perfume, then finishing with the top notes. The pre-modern Indians did this as well but in a slightly different manner. In pre-modern times, this type of paste would be applied to the entire body, then layered with fresh flower garlands or other plant material. Thus, instead of making a harmonized perfume blend in a bottle, they would compose a perfume by applying the base notes to the physical form and use fresh ingredients to make middle and top notes. A full body perfume. 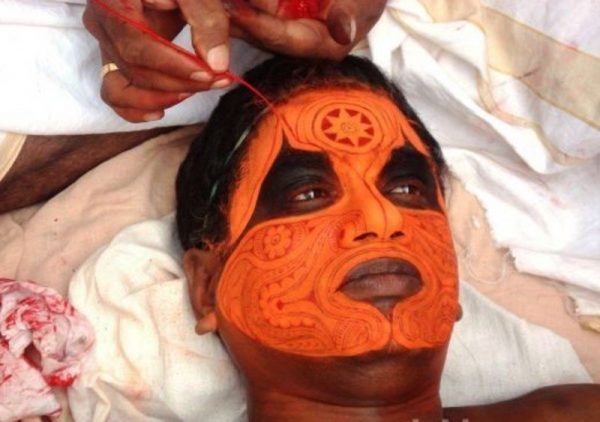 A 2007 recreation of ‘an ancient art form’ in Kerala from chime.in

In a matter of two hours, we reviewed concepts about aromatics from ancient texts, took a scented trip around Southern Asia via raw materials and made a solid perfumed paste. If you are interested in the history of perfumery or an academic look at the ancient texts of India from the perspective of scent, James McHugh’s book ‘Sandalwood and Carrion’ is a must for your library. Experiencing these ancient aromatic texts in this modern era helps illuminate the ancient wisdom so we can integrate their depth and symbolism into our modern, scientific world.

I was introduced to essential oils and natural perfumes in the late 1980’s and have been hooked ever since. While attending massage school at the Aveda Institute Minneapolis in 1993, I was exposed to the Indian medical science of Ayurveda. For the last twenty years I have been fortunate enough to use plant derived products in my personal life, as well as at work, literally touching tens of thousands of people with oils, herbs and scents. As an educator of Aromatherapy, Ayurveda and other spa services, I’ve also been witness to students touching and sharing this knowledge with hundreds of thousands of people, from every corner of the globe. As a 2003 graduate of California College of Ayurveda, my passion for creating a state of “balance” has been fundamentally accomplished through the use of the five senses: sight, sound, touch, taste and smell.

Over the last two years I have focused my energy on learning the technical art of perfumery by attending seminars, classes and groups with renowned Natural Perfumers and organizations. As a Friend of the Natural Perfumers Guild and a recent enrollee to the Natural Perfumery Institute, I am honored to have Anya McCoy as my mentor in the Guild’s Apprenticeship program. Her advice and encouragement will be priceless in my future endeavors. When it comes to education, I have very high standards, both as a student and as a teacher. The Natural Perfumery Institute’s “Natural Perfumery Institute: Basic  Course” is simply the best text book and program I have seen on the subject of natural perfumery. It is presented as a higher educational text book, clearly written and organized in a coherent manner. For those who have looked into the conventional path to becoming a modern perfumer, which has many hurdles, this program is a great option. Clear, concise and extremely informative.

More on the IAO:

From Anya:  Readers:  Have you ever studied or practiced these pre-modern Indian perfumery practices? Are you inspired to try making colored perfumed pastes?  Leave a comment and you’ll be in the drawing for random selection of 2mls of organic, vintage Sri Lankan Santalum album sandalwood oil to get your experiments started. Leave a message by 11:50 PM Wednesday April 24th, and the winner will be announced here on Thursday April 25th.  Be sure to check the box to receive followup messages in this thread so that you will see the winner. Actually, we’re all winners for receiving this knowledge from Prof. McHugh via Daniel and the IAO!

Links mentioned in this article: