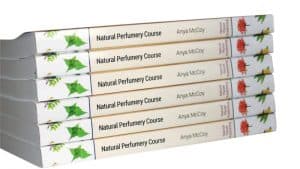 The art of natural perfumery is being reborn in the 21st century, and enthusiasts worldwide are embracing this fragrant renaissance.  The hippie culture and aromatherapy practitioners brought essential oils to the general public, starting in the 1960s and 1970s, and many people began to use them to blend simple perfumes.  Suddenly, people had access to the materials to create perfumes for themselves, and the availability and quality of aromatics grew.  Several books promoted the concept of natural perfumery and inspired many to embrace this art.

I had been studying perfumery from books, on my own, since 1976, when I obtained a copy of William I. Kaufman’s book, Perfume (1974).  Several essays in that book, and a chart that showed how to evaluate aromatics were my foundation for study.  I found rare and varied sources for absolutes and essential oils, and set about having fun with them as study aids, never thinking that I could be a perfumer.  It just wasn’t something that would occur to an American living in the mid-20th century.  All perfumers were in France, right?

The growth of aromatherapy gave me the courage to release a line of oil-based perfumes in 1991 under the label, Anya’s Tropical Essences.  They were sold mainly on South Beach (Miami Beach), Florida.  Several stores, such as Beautiful Things, Unicorn Village (Aventura), and Fabulous sold them to the public at retail prices, and I sold them in the lobbies of the South Beach Art Deco hotels that I frequented, such as the Marlin, a hangout for music artists and celebrities.  In 2000, I restarted a Usenet group called alt.perfume, which had languished and fallen into disuse.  That year, I also started a perfumery discussion group on idma.com.  It was always my passion to talk about, swap, enjoy, and promote perfumery, focusing on natural ingredients.

I started an online Yahoo! group in 2002 as a community education and information exchange resource for natural perfumery and now host over 2300 members there, as of August 2012.  The Yahoo! Natural Perfumery Group (YNPG) contains the world’s largest repository of information, links, files, messages, photos, and more, making it a true educational and community resource, which is available free of charge to anyone who joins it.

In June 2006, I reopened the Artisan Natural Perfumers Guild (now known as the Natural Perfumers Guild), which was originally founded by perfumer, Mandy Aftel.  Mandy honored me when she told me that she admired the way that I could work with large groups of people in the community, and how I nurtured growth and education for them, so she handed over the Guild to me, granting me full ownership I also manage a private Yahoo! group for Guild members, where announcements, discussions, special sales, and networking communications can take place amongst the members. More pertinent to the Natural Perfumery Institute (NPI) students, I opened a lifetime-enrollment private Yahoo! Group so that each student is connected with me, the adjunct faculty, and other students.

The phenomenal growth of natural perfumery in just a few short years prompted me to design this course in natural perfumery.  I also had requests from many people in the Guild and the Internet communities who have known of my mentoring and outreach efforts to promote natural perfumery, so I developed the first basic level online study course and began formal instruction in 2007.  It is the only online course of its type, and upgrades and additional materials are added constantly.

The goal of this course is to lay the foundation for your future development as a natural perfumer.  The syllabus builds not only upon my years of experience as a perfumer but also from the feedback and observations that resulted from the previous courses.  This course is structured in a logical and comprehensive manner that enables you to build the skills of scent recognition and scent memory while learning perfume theory, practice, and creation. [1]  Upon completion of the course, you will be able to combine art and science to blend perfumes, and know when and why a blend is good enough to be called a perfume

The course focuses on the French method of perfume creation that evolved during the 20th century, and which is recognized as the preeminent standard for the industry, in both the artisan genre and the mainstream corporate genre.  The basis of this method is the creation of top, middle, and base accords as the dominant structure for the perfume.  The goals of the perfumer are the concomitant elements of beauty, pleasure, and artistic accomplishment.  Other methods of perfume creation will be offered in the intermediate level course, but it is crucial that the classical basic methodology is mastered first.  I encourage you to continue your study at the intermediate level in order to perfect your skills for a career as a professional perfumer.

There are few online courses that teach the classical method of scent memory that is taught in this course, and no other course teaches this method and specializes in natural perfumery.  This focus, which is embedded in a discipline called the Organoleptic Method, combined with the other study tools, will lay the foundation for your career as a natural perfumer.

The course is presented in six modules, which will take you through three levels of expertise as a student of natural perfumery.  [2]  At the completion of Module 1, you will be a Contextual level perfumer.  You will move through subsequent modules to become a Certain level perfumer, and finally, an Active level perfumer.  While you work through this course, you will be able to see the progression of the learning process, and it will give you a definite feeling of advancement on your career path.

You will learn about the practical side of the perfume business, such as how to set up a workspace studio, including which tools and equipment are necessary for creating perfumes.  You will also learn about the regulations and legislation that govern professional perfumery so that you are prepared to deal with them in the future.

If you are enrolled in the private tutorial course, you will use this modular text as your foundation documentation, augmented by the online resources: lectures, live chats, and the Yahoo! student discussion group that was previously mentioned.  Both the private tutorial students and the independent students are emailed the forms, charts, and supporting materials for the course when they enroll.  When updates to any of these are made, they are uploaded to the Yahoo! student discussion group, and a notice is sent to the students to inform them of this.

No matter which study option you are enrolled in, this course provides a systematic, logical approach to the practice of perfume formulation, giving you full rein to follow your creative impulses.  You will learn how to evaluate your own blends and the blends of others with a lack of prejudice, which is the true goal of an artist.  You will bloom as an artisan; one who creates with your hands, your nose, your scent memory, and your consciousness.